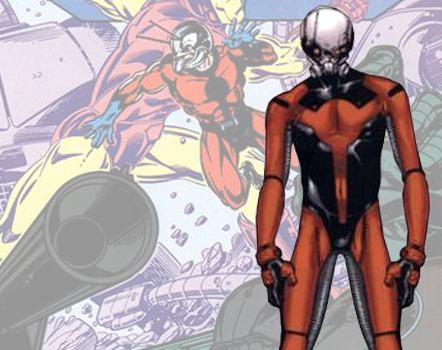 Height: 6'0" (can shrink to a half inch as Ant-Man)
Weight: 190 lbs.
Eyes: Blue
Hair: Reddish blonde
Powers
Has the abilities to shrink to roughly the size of an ant, also can communicate telepathically with insects, and (as Ant-Man) can punch with as much force as a normal sized person
Abilities
Expertise in electronics
Weapons
Possesses a helmet which is used to communicate to, and control, insects and amplify his voice so that a normal sized person can hear him; also has wrist gauntlets, which enable him to shoot bioelectric blasts

Scott Lang was an electronic engineer who was unable to support his family, and decided to turn to crime. He was caught and sentenced to 5 years in jail, but got out early for good behavior. Once freed he began to work at Stark International's design department. When his daughter was diagnosed with a fatal heart condition, Lang sought help from Dr. Erica Sondheim, who was kidnapped by Cross Technological Enterprises founder Darren Cross, for help with his own heart condition. In order to rescue her, and save his daughter, Lang broke in to the home of Dr. Henry Pym, the first Ant-Man, and stole his technology. After a successful rescue, Lang tried to turn himself in, but Pym allowed him to keep the suit, but for the purpose of good.
Dividing his time between costumed heroics and his family responsibilities, Ant-Man worked alongside several super heroes, aiding members of the Avengers against the mercenary Taskmaster on two occasions. When Baron Zemo’s Masters of Evil attacked the Avengers and took control of the Avengers Mansion, Ant-Man offered his assistance to the Avengers in defeating the criminal super-team. The Fantastic Four subsequently hired him as an electronics expert when Mister Fantastic was believed to be dead, and he was inducted into the team.
and clashed with such enemies as Following Mister Fantastic’s return, Ant-Man joined the team known as Heroes for HireGhaur and the Master. After Heroes For Hire disbanded, he again aided the Avengers against the Taskmaster; he also began dating former super hero Jessica Jones, although their relationship ended after he learned she was pregnant with Luke Cage’s child. Ant-Man next fought alongside the Avengers against the menace of Scorpio and the In-Betweener, then was invited to join full-time, a role he only accepted after losing custody of his daughter to his ex-wife.
As an Avenger, Ant-Man had always butted heads with his teammate, Jack of Hearts, who later sacrificed his life in order to rescue Ant-Man's daughter. Ant-Man was killed when Jack of Heart's resurrected body blew up the Avenger's Mansion.